Dr. Chang’s personable demeanor helps you feel relaxed and comfortable from the moment you first meet him. Save $50 on your consultation (regularly $150), or call us at (410) 740-9330. Please note, this discount cannot be applied to procedures covered by insurance, only applies to cosmetic consults, and is valid for new patients only. For existing patients, please contact us online or call the office for an appointment.

A Personal Interest in Your Care

Dr. Chang values the time he spends with each patient and knows that listening to the concerns and cosmetic goals they express is one of the keys to ensuring that they are overjoyed with their results.

“It’s very important that I personally spend whatever time is necessary with a patient during her or his consultation,” Dr. Chang says. “I take at least 30 minutes to make sure I understand not only what their aesthetic concerns are, but why they are considering a cosmetic procedure.”

As a specialist in both surgical and non-surgical treatments, Dr. Chang offers unbiased recommendations and will be happy to advise you on less-invasive options. For patients who opt for injectable treatments such as fillers or BOTOX® Cosmetic, Dr. Chang personally performs all injections, ensuring safe, predictable outcomes.

Dr. Chang has equal appreciation for the aesthetic and reconstructive aspects of plastic surgery and takes pride in offering patients advanced surgical options that can be life-changing. His interest in plastic surgery was initially sparked by the gratification he felt from performing procedures such as breast reconstruction and reconstruction for patients with disfiguring conditions resulting from birth defects, skin cancer, or traumatic injuries. This remains a significant portion of his practice, and is one way he gives back to underserved communities both in the U.S. and in other parts of the world.

He also enjoys the cosmetic side of his practice, which allows him to help individuals feel more attractive and confident.

“I found myself drawn to plastic surgery because I was interested in reconstructive procedures,” Dr. Chang says. “But the aesthetic part of plastic surgery feeds my artistic side.” Dr. Chang’s curriculum vitae is filled with numerous honors, including being named a “Top Doctor” by U.S. News & World Report — an exclusive list limited to the top 10% of plastic surgeons in the area. Other honors and awards include being selected by Frederick Magazine readers for inclusion in the “Top Docs” issue and receiving the Merksamer Scholarship Award from the College of Physicians and Surgeons at Columbia University, and being named the Best Plastic Surgeon in Howard Magazine’s 2015 Reader’s Poll published in The Baltimore Sun.

In April 2019, Dr. Chang was appointed as Assistant Professor of Plastic and Reconstructive Surgery at Johns Hopkins. This prestigious appointment allows Dr. Chang to contribute to ongoing medical education for the next generation and demonstrates his commitment to the field.

The professional distinctions Dr. Chang has earned include:

Dr. Chang is the author of several journal articles and book chapters, and has served as a guest resident reviewer for Plastic & Reconstructive Surgery® and the Journal of Hand Surgery. He has presented his research at several national plastic surgery meetings.

Dr. Chang and his wife live in Columbia with their 3 children. 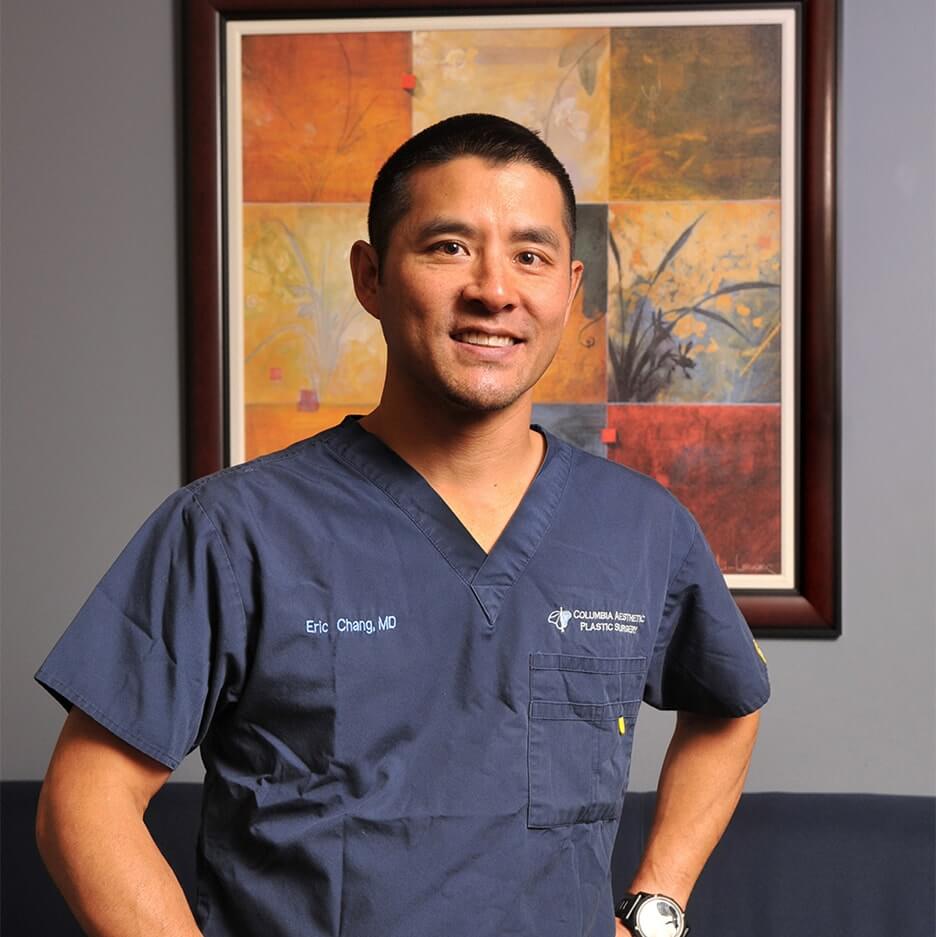 By checking the box on the contact form, you agree to the Terms of Use listed here:

Communications through our website or via email are not encrypted and are not necessarily secure. Use of the internet or email is for your convenience only, and by using them, you assume the risk of unauthorized use.

By checking this box you hereby agree to hold Columbia Aesthetic Plastic Surgery, its doctors and affiliates, harmless from any hacking or any other unauthorized use of your personal information by outside parties.

XWe use Web Content Accessibility Guidelines (WCAG) 2.0 level AA, with the exception of content from third party sources (such as embedded videos), and color contrast ratios in order to keep with our branding style, as the minimum technical standard to develop and maintain this website. Where possible, we try to exceed this level of guidelines. We ask that you report any problems you may experience with our site and we will make every effort to correct the issue.